The wooden boardwalk at the port in Punta del Este.

Looking from the park towards the lighthouse of Punta del Este. 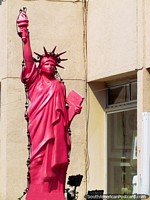 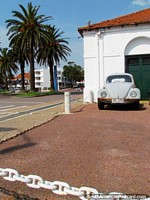 September is definitely not peak season in Punta del Este, the beaches and town were deserted. Having said that I don't know if I would want to be here in the middle of peak season either (Christmas to late February). Next time I think I will come between March and May. It was a bit cold and windy while I was here with mainly cloudy skies however I enjoyed exploring the town, port and a few historical streets.

From the bus terminal near Playa Brava I walked a short distance (5mins) to a quiet street where I found a hostel to stay in. It was early morning. I had travelled all night - a flight from Colombia to Buenos Aires, a ferry from there to Colonia and then a couple of buses to get to Punta del Este. I was not going to spend the day sleeping that was for sure! The man at the hostel said there was a storm coming, the skies were getting darker by the minute too. As it turned out, after I headed out it started becoming fine and the storm never arrived on this day.

I walked down to Playa Brava, it's a nice long 'n' wide beach with white sands, there was virtually nobody around apart from a few other visitors taking photos of each other beside the huge hand monument called Los Dedos (fingers). There was a couple sitting in chairs in the middle of the beach reading magazines and surfers catching waves nearby.

I walked up into town, there's a very colorful shop called Canoa Quebrada with distance signs outside to many cities and countries around the world for example 4918kms to Bogota (where I had flown from the day before). Up the road a little is the main square Plaza General Artigas which also doubles as the Arts and Crafts Fair on certain days. The plaza is surrounded by many palm trees and has a central statue of Jose G. Artigas - the national hero. I ate lunch at Burger King, saw a pink statue of liberty in a side street, an art gallery, Plaza de Bersaglieri Italiani and lastly the bull sculpture near the sea called El Rapto de Europa (1962) by Oscar Alvarino.

From here I walked downward towards the port on the otherside. The waters here are nice and calm, totally unlike the rough sea and waves crashing onto the beach before, the sun was coming out too. A wooden boardwalk goes around the bay, boats sit peacefully in the water, the shoreline is rocky and a pair of huge anchor monuments sit on the grassy bank. I came to Plaza Juan Ortholan, the Yacht Club, the Navy Base and the White Palace at the far end.

By the look of the building the police station is in I was now in the historical area of town. The police station also has toursit information. There are a few interesting houses and buildings around here including the lighthouse Faro de Punta del Este (1860). Next to the lighthouse is a nice park and across the road is a lightblue church Parroquia Nuestra Senora de la Candelaria and the weather station. Beside this is the first school (1896).

Next morning from Punta del Este I visited Maldonado for a few hours and walked around in the rain before returning to the hostel where I relaxed for the afternoon before getting a bus north 3hrs 30mins to Punta del Diablo for the night. The weather was terrible in Punta del Diablo, I saw nothing. Next day I took a bus further north to Chuy and the border of Brazil (1hr).


View all photos in the Punta del Este Photoset

The Trip Hostel, Punta del Este, Uruguay (September 2013 - 1 night) - Easy-going hostel with laidback hosts. Very close to Playa Brava and town. I stayed in a dorm with some cool girls from Chile. There's a kitchen and fridges to use and enough bathrooms with nice hot showers for everyone.
Uruguay Travel Blog | Photos of Uruguay | Festivals in Uruguay | South America Videos 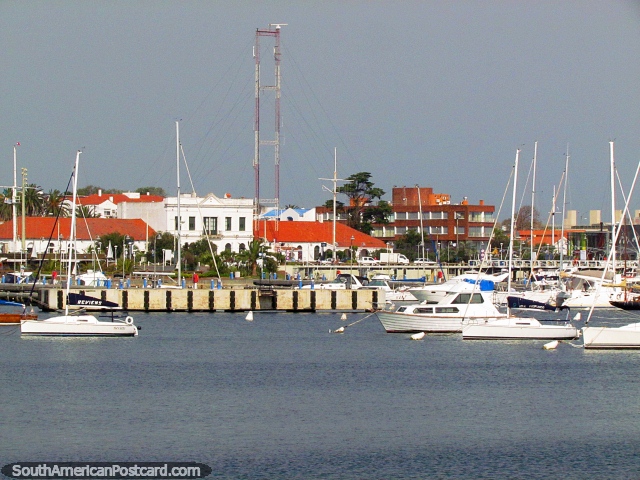