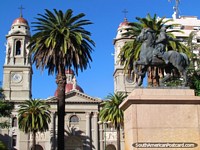 Cathedral, monument and palm trees at Plaza Independencia in Mercedes. 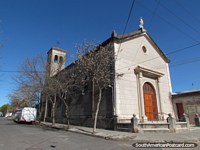 Mercedes is a lovely small city on the banks of the Negro River inland from the Uruguay River and the border with Argentina. Walking around Mercedes is captivating with its many eye-catching streets, colorful houses and tree-lined footpaths. Being beside the river brings a definite sense of being able to relax and take it easy, go fishing or just enjoy the peace of nature. I have visited Mercedes twice, each time coming from Paysandu. From the bus terminal it is half a dozen or so blocks into the center.

The main plaza is called Plaza Independencia. It's a sunny plaza with palm trees and a monument of Asencio (28 February 1811). On one side of the plaza is the great cathedral of Nuestra Senora de las Mercedes - a National Historical Monument. The cathedral is beautiful outside and in, chandeliers, stained glass windows, dome and dual towers. Walking along the cobblestone streets to admire the old houses and architecture - interesting doorways, windows, facades and colors. The leafless trees created stark shadows on the sides of them. Plaza Rivera is a big sunny space surrounded by shady trees, it is named after Uruguayan General and President Jose Fructuoso Rivera (1784-1854), the central monument is a tall white column with a figure at the top holding a spear. The center of town has a modern shopping area and a few historical buildings - a gothic church, the police school and a pink church Iglesia Metodista. Another church, Sagrado Corazon (1952), not old by historic standards, nearby is Plaza Lavalleja. It's a big sunny plaza with palms and a fountain, a Juan Antonio Lavalleja monument stands with a flag, he was a Uruguayan revolutionary figure (1784-1853). Between the center and the bus terminal is the church - Iglesia de Maria Auxiliadora and Plaza Artigas. Every city in Uruguay has a Plaza Artigas, he's the national hero!

Walk to the River

Walking towards the river through the cobblestone streets, past colorful historical houses. Reaching the main road along the waterfront known as the Rambla. It's beautiful and picturesque with trees and parks all around. There are plazas dedicated to various South American countries. Plaza Paraguay with its fountain water feature and art piece. Continuing along the shady tree-lined path is a wild deer sculpture. Next is a monument to one of the famous conquerors and Plaza Republica Argentina. From here a single line of tall bushy palm trees leads the way along the riverfront path to the next art piece and then to another in Plaza Brasil. Plaza Sociedad Amigos de la Educacion Popular 1868 is next, a nice big open space with panoramic views of the river. The monument is to Jose Pedro Varela (1845-1879) - a Uruguayan sociologist and a major advancer of the Uruguayan education system. A group of men carried a boat down to the river, the river was still, it made a beautiful scene. A tourist ferry was docked alongside the cobblestone wharf area as were sailboats and small wooden fishing dinghies, an old railtrack runs by here.

There is a bridge across the river to the island - Isla del Puerto (Port Island). The island has beaches, camping and a restaurant. It's a beautiful place and so peaceful with picnic areas beside the water and tables and chairs spread out underneath the trees. You will love it here beside the Negro River in Mercedes! The first time I visited Mercedes was in the month of May, the bridge and island were above water. When I visited in November the water was much higher and the bridge and island were both under the water. It very much depends on what time of year it is for the opportunity to get to Port Island!

From Mercedes south to Carmelo through Dolores and Palmira takes around 2hrs.


View all photos in the Mercedes Photoset

Hotel Marin, Mercedes, Uruguay (May 2012 - 1 night) - Large room with basic bathroom and a tv. Not too bad for the price. Located in the center of town not far from the plaza.
Uruguay Travel Blog | Photos of Uruguay | Festivals in Uruguay | South America Videos 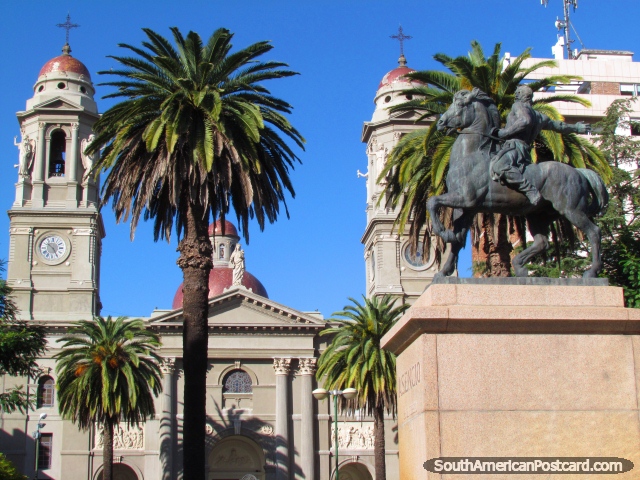