Nickerie & the Bus from Paramaribo - Suriname

The road becomes brick for a while, around Nickerie, Suriname.

Eben Haezer church in Nickerie, photo of the day, Suriname.

Lily leaves, pink flowers and a bridge to cross in Nickerie, Suriname.

Tata Colin statue in Coronie, a slave in a cotton plantation in the century 1800s, Suriname.
Map location: Nickerie & the Journey from Paramaribo - Suriname, 3guianas

The 4 and a half hour bus journey from Suriname's capital Paramaribo west to Nickerie isn't particularly interesting or picturesque as far as sights go. The road isn't that great either which is why it takes 4hrs and 30mins, the distance is only 234kms.

Sights Along the Way

The countryside is nice of course with lots of farms and palms and wide-open space. The main industries are coconuts, rice and bananas. You pass the occasional temple or mosque such as Masdjid Alie Moertaza Muslim Temple. In Coronie, a small town we briefly stopped at, there is a statue of Tata Colin who was a slave in the cotton plantation Leasowes in Coronie in the 1800's. There are lots of waterways and bridges to cross during the journey.

The town of Nickerie itself has nothing to see of great note apart from a couple of churches (Eben Haezer and Vredeskerk), a cannon in the park and a couple of busts. One of the busts is of Jaggernath Lachmon (1916-2001), a politician born in Corantijnpolder (a few kms west) in the district of Nickerie. I suppose the best sight in town would be the huge lily waterway with pink flowers which has bridge crossings along it's route.

One thing that is very noticeable about Nickerie is the sight of, for example, an office building right next door to a shanty house or a hotel directly across the road from a shanty shack.

Distances from Nickerie to other parts of the country are: Southdrain (the western border) 37kms, Wageningen 48kms, Totness 94kms, Coppenamebrug 144kms and Albina (the eastern border) 373kms.

After staying the night at a hotel that served Chinese food I left town early the next morning and headed to Southdrain for the border cross to Guyana.


My Hostel & Hotel Reviews for Nickerie & the Bus from Paramaribo - Suriname, 3guianas:

Concorde Hotel, Nickerie, Suriname (April 2015 - 1 night) - $27USD per night. The Concorde Hotel in Nickerie has rooms with aircon, tv, wifi (in the front rooms and reception area) and private bathroom. There is a restaurant in the front area that serves Chinese food and is open until 11pm. If you are a foreigner, be careful the Chinese woman receptionist on the day shift does not short change you like she did me, (about $3USD). This woman also just sat there and listened to 2 men tell me complete lies about how to cross the border to Guayana with the illegal method called the backtrack and said nothing. She needs to be fired immediately! The man at reception in the evening was very nice though, he helped organise a taxi for the morning to take me to the ferry to Guayana. I can recommend the Concorde Hotel because of the price and the restaurant, you do not want to be walking around this town at night.
3guianas Travel Blog | Photos of 3guianas | Festivals in 3guianas | South America Videos 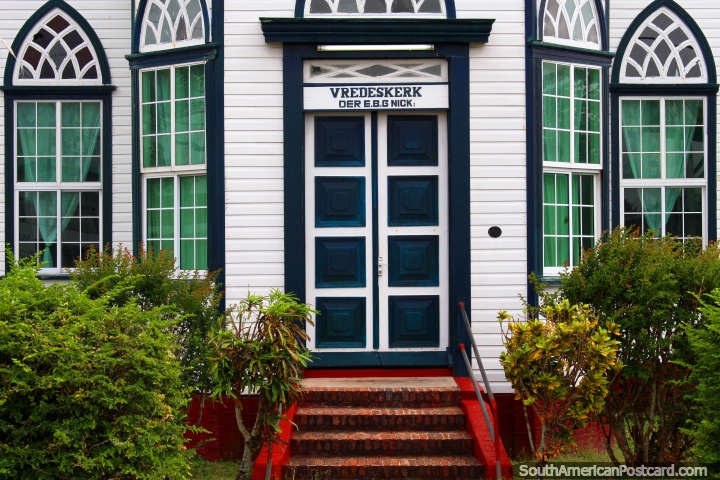