Bronze-work of 3 children, one with a monkey, Saint Laurent du Maroni, French Guiana.

Palais de Justice, one of the original courts in Saint Laurent du Maroni in French Guiana.

View of the river from the park in Saint Laurent du Maroni in French Guiana.

From Kourou I hitched a ride west to Saint Laurent du Maroni on the western border of French Guiana, 2hrs to travel 200kms at high speed. Saint Laurent is the 2nd most populated city in French Guiana but it didn't seem like it, there were very few people around town. Where were the 40,000+ inhabitants?

There are a couple of flash hotels in the town center, the first was too expensive for me so I stayed at the 2nd most expensive hotel instead. It was still expensive by backpacker standards but that about sums up French Guiana - expensive. Unless you want to sleep in a hammock which I didn't.

I found a Chinese restaurant on a side street off of the main drag and had a cheap meal, $6euros. There was a few hours of daylight remaining so I headed out with my camera to have a good look around. Saint Laurent is kind of interesting and has an interesting past but it is not an overly safe place though. There are many dodgy and strange people all around the place, especially at night!

The town was founded in 1858 as the arrival point for prisoners coming to the holding point - Camp de la Transportation before they would be moved to other prisons around the country.

History Around the Church

The first church was also set up in 1858, another church was built between 1868 and 1872 - made of wood but was eaten by termites. They built another in 1885, this time made of metal and brick! This is the church you see at the end of the main street. Next to this is Paroisse Saint Laurent, a parish, an historical yellow wooden building with a couple of palm trees standing in front of it. I walked around the area of the church where other historical buildings are located including the Banque de la Guyane (the bank) - an impressive red-brick building with stone entrance, stairs, balcony and window frames. The next building I came to looked like a train station from the outside with its clock face and pillars but it's actually the Town Hall. There is a VIP lounge called the Salon d'honneur Claudine Bertrand. Claudine Bertrand is an educator and poet. Nearby the next building on this street is the Sous Prefecture. This is possibly the most important building here, it is the court. It is the 3rd court built in Saint Laurent du Maroni, it was planned in 1897 but I believe it took decades to complete the inside fitting due to a lack of wood. The outside has a neoclassical edifice with a columned porch. The first 2 courts were used for judging civilians in one and in the other the crimes and offences committed by the convicts.

The river beach is very close, nearby there's a monument commemorating the Glorious Revolution (1688). At the waters edge there are ruins of an old dock, possibly it was the arrival point of the convicts, there is not much left of it now. A cannon stands beside just incase any of them tried to run or swim away. The coolest and most spectacular sight from the beach is the shipwreck with a forest growing out of it in the water near the shore. It is the wreck of the Edith Cavell. A commercial ship of a British merchant which ran aground on the 19th December 1925. It is known as The Island Boat (Le Bateau Ile). There is also another smaller shipwreck half on the sand and half in the water. The grassy park behind has a bronzework of a prisoner with a chained foot and his head in his hands.

The prison is a must-see and is called 'Le Camp de la Transportation', tours are available but I just had a self-guided look through. There were 3 classes of convict: new convicts automatically were 3rd class for 2yrs and had the hardest labour, 2nd class received lighter labour and were in charge of city maintenance, 1st class had the pick of jobs, better living conditions and more chances to escape! Saint Laurent was built by these convicts between 1890 and 1930. The most famous prison escape was that of Henri Charriere, his story is told in his autobiography and a film called Papillon. Le Camp de la Transportation was officially closed in 1946 (see Albert Londres) and declared an historical monument in 1994.

As I walked towards the center of town I passed the Palais de Justice, one of the original courts. Next I passed the school built between 1903 and 1912. In 1904 it had 95 pupils.

I enjoyed what I saw in Saint Laurent du Maroni a lot, it's small and only took an hour and a half. In the morning I walked to the port area where customs is also located and headed across the river to Albina - Suriname, 10 minutes.

Hotel Star, St Laurent du Maroni, French Guiana (April 2015 - 1 night) - Hotel Star is the 2nd most expensive hotel in St Laurent du Maroni, it was $68 euros per night, the other nearby was $100 euros. I'm sure there would be cheaper places in town but this is a dodgy town and I didn't want to be in a bad area so I stayed here. French Guiana is expensive, full-stop! It's a very nice hotel though. I had a private room with tv, aircon, wifi and bathroom with hot water. Breakfast cost extra but I didn't try it, something like $8 euros. Hotel Star is pretty flash, I don't see why one would need to spend more to stay at the other hotel. Recommended.
3guianas Travel Blog | Photos of 3guianas | Festivals in 3guianas | South America Videos 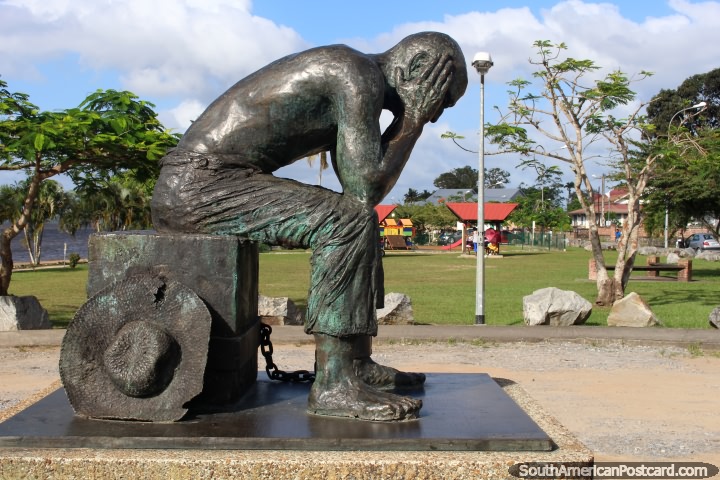