City Hall and a big green tree in Georgetown, Guyana.

City Hall from a distance, the top half, Georgetown, Guyana.

Georgetown was the last stop on my first trip to the 3 Guianas and to be honest the least best capital city out of Cayenne, Paramaribo and Georgetown. I arrived here from Moleson Creek, a 3hr journey from the eastern border with Suriname. Georgetown is a mixed bag with a few interesting sights, but in general is quite rundown and dirty. The truth is that you can see everything that is worth seeing in a few hours. Occasionally while walking around Georgetown you may see horses pulling carts.

The best sights are firstly St George's Anglican Cathedral which they say is one of the worlds tallest churches at 43.5 metres. It was completed in 1892. The outside needs a paint and some renovation which they are trying to raise money for at the moment. The inside is really nice with pointed arches, flying buttresses, vaulted ceilings and traceried windows being a few of the noteworthy architectural features of this Gothic structure. The original St Georges was built in 1810-1811 across the road where the school is now located. You will find the cathedral on Church St so that's easy to remember!

Across the road from the cathedral is the Non Aligned Monument, this is apparently one of Guyana's most distinctive and historically significant monuments. It commemorates the 1972 Conference of Foreign Ministers of Non-Aligned countries held in Guyana. It consists of 4 busts of the founders of this movement, they being President Gamal Abdel Nasser of Egypt, President Kwame Nkrumah of Ghana, President Pandit Jawaharlall Nehru of India and President Josip Broz Tito of Yugoslavia. Each bust was sculptured in the country of the founder.

Avenue of the Republic

Just a couple of minutes walk from the Non Aligned Monument is Ave. of the Republic which is where most of the rest of the historical buildings and sights are located.

The City Hall is the most spectacular sight on this street. It is in need of paint and some renovation but is a fantastic sight all the same. It was built between 1887 and 1889 and apart from the tile roof, cast iron columns and decorative elements, the structure is made totally from local timber. A marble sculpture of William Russell (1827-1888) stands on the lawns in honour of his work in the city. He was a sugar planter and president of the agricultural society.

Right next door to City Hall is the City Engineer's Department which is almost identical to City Hall with its arches and design. They are like twins!

The next building along the street is the High Court (Victoria Law Courts) which was opened in 1887. The building has many arched doorways on the ground floor underneath a long balcony beneath triangle shaped roofs. On the front lawn is a large marble statue of Queen Victoria.

Nearby beside the Demerara river is the most lively and busiest area of the city - the Stabroek Market with a prominent iron clock tower in the center. The markets are what you would expect and sell everything including fresh fish. Money changers change money on the street. It is also a high crime area so you need to be careful at all times! In the streets around the historical area are many people living rough.

The Parliament Building is the next building worth seeing, completed in 1834 and of classical renaissance style architecture with columns and a big dome. It has a pair of cannon out front and a statue of the father of trade unionism - Hubert Nathaniel Critchlow (1884-1958) in the corner of the grounds (erected in 1964).

Across the road from here stands St. Andrew's Kirk, the oldest building in the city. Built between 1811 and 1818, it has a high steeple and a double angled roof and is a proposed structure for Georgetown's nomination to the UNESCO World Heritage List. Nearby is another church called the Bedford Methodist Church which is also made of wood.

Next I came to the Monument Garden, it looked like a nice place to relax with the flowers and green grass but for some reason was closed on this day. The monument in the middle is of a ship.

Another couple of buildings of note are the Magistrates Court made from iron and brick, I'm sure with some wood in there too and secondly St. Stanislaus College opened in 1866 which is a beautiful wooden building of white and light blue. Next to the college is a small plaza they call Parliament Square which opened in 2012.

I visited the Botanical Gardens. At the entrance is the Jenman Building Education Center named after George Samuel Jenman (1845-1902) who was a British gardener and botanist. Actually this building and a handful of flowers they have growing around it is the best sight at these so-called botanical gardens. After passing this building and walking into the gardens I couldn't see any flowers or gardens of any kind, there was nothing to see. I asked a security guy where the gardens were and he replied I was in them. As for birdwatching, I can't say for sure. I saw a yellow bird and a brown one, that's it. I suggest Georgetown magicians bring Mr. Jenman back to life and get him here to actually make some gardens. On the other hand maybe the people of the city could do it themselves, that way they would create a botanical garden actually worth visiting if you get my drift. There is however a large grass area, trees and a pond. It's a park not a botanical garden, ok?

Next to the park is the zoo. I visited the zoo and regretted every second of it. The place is unkept and the poor animals are shut up in tiny cages. I have never seen such a sad looking bunch of animals in my life especially the sorry looking jabiru stork.

Close the Zoo Down!

I told zoo management that they should set the animals free and close the place down, it's a disgrace. Do not visit this zoo or support it. I spent no more than 10mins inside the place and left feeling angry and pissed off!

I walked to the National Park, quite a few blocks from the center of town. It wasn't great with lots of rubbish in the waterway of lilies. Apart from a horse there is really nothing to see here.

This was my experience of Georgetown - Guyana, the historic area is good but the rest they need to work on! I will return in the future to see more of the country. From Georgetown I flew back to Colombia.


View all photos in the Georgetown, Best Sights & Things To See - Guyana Photoset

Sleep In Guesthouse, Georgetown, Guyana (April 2015 - 3 nights) - $50USD per night. A fantastic room with tv, aircon, wifi and private bathroom with hot water. Breakfast was included each morning. The staff are helpful and friendly. Located around the center but not on an easy road to walk along. A high class hotel but at half the price of other hotels of similar style. Very good value for money but not a budget hotel. I looked at a couple of cheaper options before deciding to stay here. Recommended if you want to be comfortable!
3guianas Travel Blog | Photos of 3guianas | Festivals in 3guianas | South America Videos 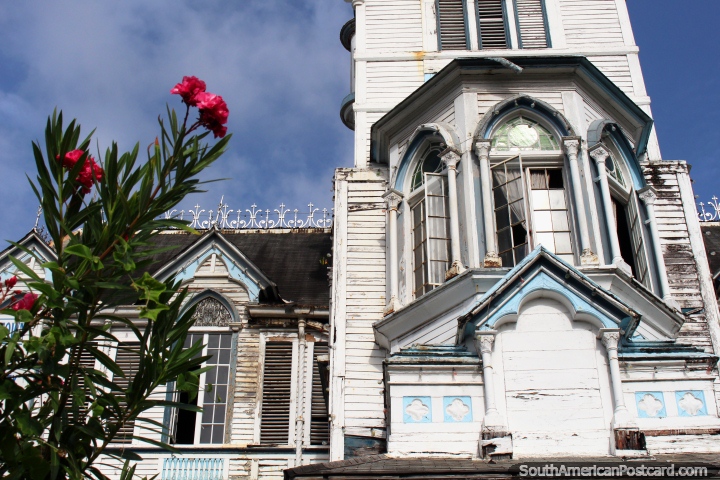