From green to semi-red to fully red, Rambutan is a fruit they like in Cayenne, French Guiana.

Fountain and historical buildings beside the Prefecture in Cayenne, French Guiana.

Some buildings in Cayenne are very symmetrical, iron balconies and windows, French Guiana.

Take the cultures of France, China, the Caribbean and a touch of Brazil, mix them altogether and you get the city of Cayenne, the vibrant capital of French Guiana! Cayenne is a pleasant city to spend a day exploring. 1 day is really all you need to see most if not all the sights, I walked around the city twice in this time. I arrived in town in a taxi-van from the eastern border town of Saint Georges which cost $30euros and took 2hr 45mins and was dropped off at the cheapest hotel in and around the center. Time for Chinese food and a nights rest.

I set out to spend the whole day exploring the city on foot (7hrs of walking, strolling and photo taking). I got to know Cayenne quite well in this time! It was a rainy morning and I started my day where many of the locals started theirs - in the markets at 8am!

The Central market has the look and feel of Southeast Asia and is located near the foot of the fort and Hotel de Ville (town hall), just a street away. Aisles and aisles of the freshest fruit and vegetables of all colors and shapes including Chinese lettuce and the distinctive spiky red fruit called Rambutan - a native fruit of tropical Southeast Asia. On the walls around the market are African style paintings of men and women workers. Beside the markets is a grassy plaza (Place du Coq) with a monument of a rooster in the middle and nearby is a statue of Victor Schoelcher with an African slave, a Frenchman (1804-1893) who worked for the abolition of slavery.

The most prominent sight you will see while visiting Cayenne are the abundance of wrought-iron balconies, arched wooden doorways and slatted window shutters, some in perfect condition and others less so.

The centerpiece of the city is Place des Palmistes, this is the large grassy central plaza with rows and rows of palm trees everywhere. All the best important historical buildings are around here. The monument in the center is of Felix Eboue (1884-1944), the first black Frenchman appointed as governor in the French colonies, born in Cayenne. The carved stone sculpture next to the statue of Felix Eboue is quite impressive. Next to the Place des Palmistes is the very nice area around the Prefecture which has nice lawns and stone pathways and a beautiful fountain. The buildings feature white columns, red tiled roofs, a clock face and a pair of large ship anchors. This is the most well-kept area of the central city but it's not far from the sea where it roughs-up a bit with a little graffiti art and more rundown streets and buildings.

Beside the sea is a nice park and area with lawns and trees called Place des Amandiers with lots of green bench seats and picturesque views of the coast - rocky coastline with palms in the distance. Nice even on a cloudy day! The beach doesn't look bad either but was covered in washed-up driftwood at the time.

As you walk around Cayenne you are never far away from China! I found a pair of Chinese dragons outside a building that had a display of photos from a Chinese festival in the city.

From here I made my way towards the cathedral - Cathedrale Saint Sauveur. It's quite a bright cathedral compared to the dark and gloomy ones you see sometimes.

Lunch on the Main Street

Nearby on the main street is a huge mural beside an outdoor carpark featuring various characters and musicians in costume enjoying a party. I ate a nice tuna salad for lunch just across the road from here.

Street wandering is my favorite way of getting to know a place, I find the best stuff sometimes like this - interesting odds and ends and snapshots of life. I headed to the other side of the markets, away from the center to see what I could find. I saw the old port with old wooden boats sitting on the mud along its edge. I then came across some cool murals by artist Abel Adonai, a group of 5 men plus 2 more beside, not sure who they are though. I then explored the roughish neighborhood on the other side of the river (Village Chinois), I was attracted by the sight of murals and graffiti art of course! This is around the area of Avenue de la Liberte where my hotel was, this is also the street where taxi-vans leave from to head east or west. The weather was extremely hot despite the clouds so I went for a quick shower at my hotel.

Afterwards I headed in the direction of the 17th century fort ruins - Fort Ceperou, at the top of a small hill in the town center. There is nothing worth seeing of the fort, nothing left at all, just derelict buildings and broken bottles, but the view is most definitely worth seeing.

I walked a while around some of the back streets in the center to see anything else that I could find before deciding that I had pretty much seen the place and headed back to my hotel and had another Chinese meal for dinner that night. Early the next morning, around 8am I checked out and walked a few hundred meters down the road to get a taxi-van the 60kms distance to Kourou Space Center which took 1hr. I enjoyed Cayenne a lot, it's a nice city with a nice mix of people and was my 2nd favorite capital city out of itself, Paramaribo and Georgetown.


View all photos in the Cayenne, Capital Of Mixed Cultures - French Guiana Photoset

Hotel Ket Tai, Cayenne, French Guiana (April 2015 - 2 nights) - Located very close to the center but without the crazy high prices of the other hotels located in the very center. $49 euros for 1 person or $59 euros for 2 people, that's more than half the price of the flash hotels in the very center. My room was very comfortable with air-con, tv, double bed and bathroom with hot water. The hotel has wifi but it mostly works only in the foyer but you can get a room with a hotspot like I did. They charge $2 euros for an hour of internet, but you can log on and off and use the hour in your own time. I really liked the Asian couple who run the hotel, they were very nice, helpful, friendly and funny. I can recommend Hotel Ket Tai because of the price in an expensive city and country. You will be hard-pressed to find anything better or cheaper in the center of Cayenne!
3guianas Travel Blog | Photos of 3guianas | Festivals in 3guianas | South America Videos 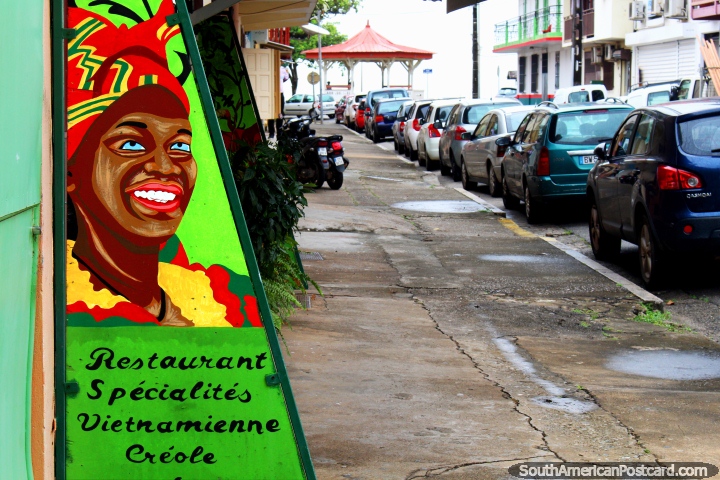