Bolivar Park, a beautiful place with paths to stroll along in Sucre. 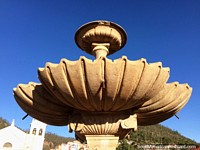 Stone flower-shaped fountain in Recoleta, up the hill from central Sucre. 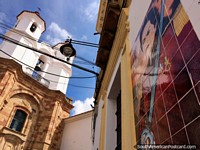 Sucre is the official capital of Bolivia, it's a lovely city full of white colonial arquitecture. For this reason it also known as the white city and is a photographers dream. 8yrs after I first visited Sucre I've come back to live here with my family for the year, that's this year - 2019. Throughout 2019 many new photos and much more information about Sucre will be added!

The first time I visited Sucre I came here from Potosi, 3hrs 30mins by bus. I looked forward to exploring the streets, parks, colonial arquitecture and monuments for which there are plenty. I found a cheap room in the center of Sucre's historical area, $5USD per person and set out on foot from here.

Firstly the church / convent El Convento y Basilica de San Francisco de Asis which was built in 1538, it is one of the most well-attended churches in the city and its interior has great artistic value. (All churches and buildings talked about in this blog are white unless otherwise stated). Across the road is a plaza with tall trees and gardens - Plazuela Santa Cruz. A monument to the founder of the university Juan de Frias-Herran (1624-1969) stands in the middle. Just a few minutes walk is the central plaza - Plaza 25 de Mayo. It has lovely gardens, flowers, trees and monuments and is surrounded by interesting structures like the cathedral and municipal buildings. The monument in the middle is that of Jaime de Zudanez de la Torre (1772-1832), a politician and hero of the independence. The other monument is of Jose Bernardo Monteagudo (1786-1825), an Argentinian lawyer, politician, journalist and revolutionary. One side of the park is dominated by 2 buildings, the Capilla Virgen de Guadalupe (cathedral) and the Palacio de Gobierno (Government Palace). The great clock tower with its many bells and statues that stands on the corner was reconstructed in 1972. A short walk from Plaza 25 de Mayo is Plaza Cochabamba, it has some nice flower gardens and is on the opposite side of the road to the church Templo de la Merced. 2 blocks north / west of here is Plaza Zudanez with its tall palm trees on the opposite side of the road to the church Santuario de Maria Auxiliadora, which was constructed in 1592. It's a beautiful building and is not stark white in color, more like an off-white. Sucre is home of some 15 museums and I plan to visit every single one of them during 2019.

Park Parque Simon Bolivar is 4 blocks from Plaza 25 de Mayo. Along the way you'll see a church, Capilla de Santa Barbara which seems to have turned into a hospital now, but the building is that of a church. Next to this is the Plaza Libertad with its bright colored flower beds and monument to Joaquin Gantier Valda (1900-1994), a playwright, biographer and poet. A tall white column (the Obelisco) stands in the gardens as a gift in May 1968 from the people of Buenos Aires (Argentina) to the people of Sucre. The cities theatre Teatro Gran Mariscal is on one side of the plaza and the supreme court, Corte Suprema de Justicia also nearby. Across the road from all this is Bolivar Park with its big arched entranceway. Just through the arches people sell pieces of yummy cake and other goodies. The park is fantastic, lots of space, lots of monuments including a replica of the Eiffel Tower of Paris that you can climb up. The park has many little areas that are all different from each other including a water fountain at the north / western end across the road from the old train station, Estacion Presidente Arce. A monument to Aniceto Arce (1824-1906) stands nearby, he was an ex-president of Bolivia and the founder of the city Uyuni. Beside Bolivar Park is a large childrens park with a dinosaur theme, it's fantastic!

The Central Market (Mercado Central) is fantastic with so many things for sale and lots of activity! Buy fruit, vegetables, baked sweet cakes, breads, flowers, household products, clothes, everything and anything. The Central Market is located just 1 block from Plaza 25 de Mayo.

In Sucre there is also the park - Parque Cretacico, this is a park that used to be a quarry. The tracks of dinosaurs were discovered in 1994, tracks of many species. You pay $30 Bolivianos ($4.30USD) to go in (locals pay $10). Inside there are a whole bunch of models of dinosaurs looking scary, the dinosaur tracks are on the opposite side of the quarry on the limestone wall Cal Orck'o and can be viewed from the park. I appreciate the dinosaur tracks but really this place is terrible, it's for kids. I felt really stupid walking around the gardens looking at plastic dinosaurs. I can't recommend it, don't bother unless you have children. Parque Cretacico is a 5-10min drive from the center of Sucre, there is a small museum here also.

Bus to Potosi, then Tupiza

After my first visit to Sucre I travelled 3hrs 30mins back to Potosi bus terminal and a further 6hrs through the night to Tupiza.


View all photos in the Sucre Photoset

Residencial Avenida, Sucre, Bolivia (February 2019 - 1 night) - Residencial Avenida is located 3 or 4 blocks from the center of Sucre and is much cheaper than any hotels in the center for $160 bob ($23USD) for a room with 3 double beds and a private bathroom, tv and wifi. Run by a nice man. A good room for a family for a night. Recommended for the price.

Alojamiento Central, Sucre, Bolivia (Nov 2011 - 1 night) - Located opposite the Sucre bus terminal. I stayed here because I wanted to catch a bus early morning. It really is quite a horrible place, I want to vomit thinking about. Stay here only if you need to. It's cheap but it's quite nasty.
Bolivia Travel Blog | Photos of Bolivia | Festivals in Bolivia | South America Videos 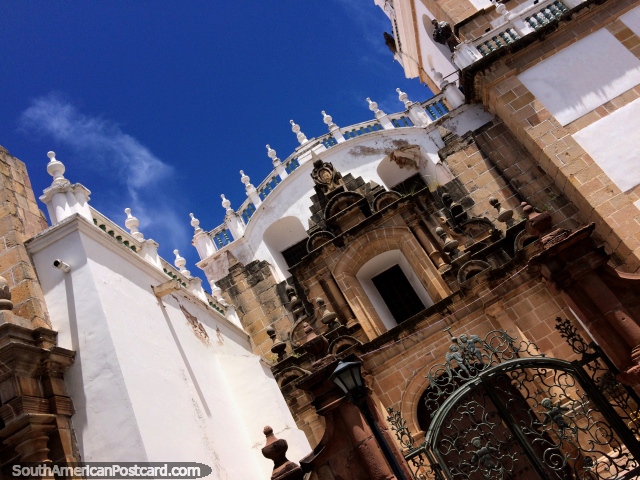