Tena, Ecuador - My First Time In An Ecuador Jungle Town 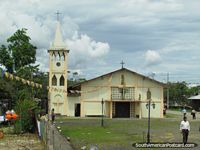 Church in a village between Tena and Puyo. 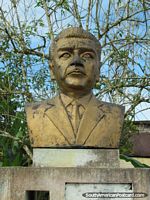 Landscapes and land beside the road between Tena and Puyo. 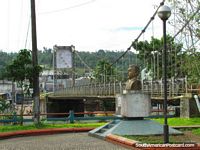 I travelled through the night from Quito to Tena, one of Ecuadors jungle towns in the eastern Amazon basin - The Oriente. It took 5 and a half hours. I arrived at the shabby and dusty Tena bus terminal at around 4am and stayed here for a few hours until it was light. I found a budget hotel and rested until lunchtime.

Tena is located right where the 2 rivers Tena and Pano converge, it is the home of rafting and kayaking. Jungle trips can be organised and trips to waterfalls also. There is a kayak school in town with Rios Ecuador. There are tours to Misahualli which includes a visit to the island of monkeys, 'La Isla de los Monos'. It is possible to visit river and jungle communities on some tours and participate in activities such as panning for gold, eating local food, swimming, hiking, bird and animal watching and arts and crafts. The Amazon Park in Tena, Parque Amazonico has an island and trail for self-guided walks through the jungle to see animals and exotic flora and fauna.

The town itself is a pleasant place with its constant backdrop of jungle and warm climate hanging around 24 degrees. A park in the center of town has a monument of a pair of indigenous people - a man blowing a dart from a tube and a woman gutting an animal. It is called Tena Kichwa y Ancestral. A couple of churches are also nearby, a blue and white one with twin towers and the mustard colored cathedral. There are monuments to Ruben Cevallos Vega and Jorge Rossi and one called La Mision Josefina 'Centenario de la Muerte de San Leonardo Murialdo' 1900-2000 commemorating 100yrs since the death of Italian Priest Leonardo Murialdo in 1900. Beside the bridge across the river is a little park that has exotic plants, golden pots and little figures sitting or standing on rocks, birds dart around the trees.

From Tena I bought a bus ticket for $5 for the 2hr 30min trip to Puyo, the jungle and scenery along the way is beautiful with mountains, jungle huts and small communities. The road is in good condition but the bus-driver did drive a little slow. We passed through Tola, Napo, Pastaza and Santa Clara. There are quite a few things to see and do between Tena and Puyo including Zoorefugio El Eden - a zoo refuge, Zoocriadero Fatima - a breeding zoo, Cavernas Rio Puyo and Cavernas de Fatima - river caves, Cabeceras Rio Puyo - river headwaters, Dique de Fatima and Dique de Murialdo - natural pools and Centro de Rescate de Fauna Yanacocha - a rescue center.


View all photos in the Tena Photoset

Residencial Napoli, Tena, Ecuador (July 2011 - 1 night) - Cheap and a little rough but good for a night, $10 for a room for 2 people with a tv. The bathroom was a shared one. We arrived at 7am in the morning, the owner was quite strict about us leaving no more than 24hrs later, but was cool about us staying until 9am the following morning.
Ecuador Travel Blog | Photos of Ecuador | Festivals in Ecuador | South America Videos