Guayaquil, Ecuador - Best Thing To Do Is See Iguanas At Seminario Park 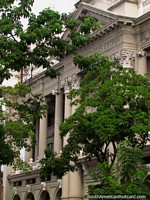 An important building at the Plaza de la Administracion, Guayaquil. 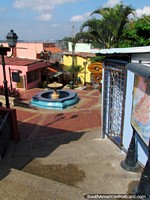 Colors are everywhere on Santa Ana hill in Guayaquil. 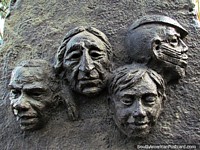 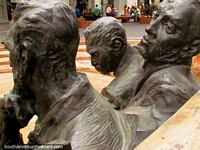 I had passed through Guayaquil bus terminal a couple of times before, on my way to other places, on my third time I decided to actually visit the city. I am glad I did, it's a modern city with some nice sights. From Huaquillas on the border with Peru it took 4hrs 30mins in the middle of the night to get here. Firstly I went to the immigration office across the road from the bus terminal to sort out a problem with my passport, then took a taxi ($4USD) to a budgetish hotel in the center of town. I was located just 5 blocks from the main cathedral. I arranged to meet a friend for lunch and have them show me around a bit. It's an awesome cathedral and the park of iguanas is just across the road!

A really fun thing to do in Guayaquil is visit the park across the road from the cathedral called Parque Seminario where there are dozens of large iguanas crawling all over the place. The iguanas are so friendly that they climb onto people while they are sitting down on the park benches eating lunch. It's a lot of fun and one of the highlights of Guayaquil - see my video!

Walking towards the river is the Plaza de la Administracion where there are many interesting historical buildings and monuments including the amazing 'La Fragua de Vulcano' monument which features 14 different people depicted in bronze and the 8.5 metre high 'Sucre' monument. There are artists painting and various other activities going on in this area, it's nice. The riverfront is very attractive, big open spaces and walkways, cafes and restaurants, parks and trees, statues and monuments, it is called the Malecon. Some of the figures celebrated in statue include Venezuelan writer Vicente Lecuna (1870-1954) and 4 former presidents - Dr. Carlos Julio Arosemena Monroy (1919-2004), Dr. Otto Arosemena Gomez (1925-1984), Juan de Dios Martinez Mera (1875-1955) and Baquerizo Moreno (1859-1951). There are several lookout platforms along the Malecon, the views of the river and city are really great, you can see the Malecon clock tower from a long distance away.

The most noticeable landmark in Guayaquil has to be the hill with all the colored houses on it, this is Cerro Santa Ana. Early next morning I set off to get to the top. At the foot of Cerro Santa Ana is Plaza Colon with a big pink and white church and a bronze head of Guayaquil's founder Francisco de Orellana (1511-1546). From here it is just a short walk to the stairs to walk up to the top through a very interesting and colorful neighborhood - it is safe, there are security men on guard along the way. Up the numbered stairs (from 1 to 444), you will see artworks, streetlamps, side alleyways, gardens and palms, bright colored houses and balconies. At the top is the fort museum, church and lighthouse and fantastic panoramic views of the city. The fort museum has something for everyone - kids and adults, with a replica of a pirate ship, many cannons and various other pieces of things. Near the entrance are bronze heads of 4 naval officers - Rafael Moran Valverde (1904-1958), Rafael Andrade Lalama (1878-1952), Thomas Charles Wright Montgomery (1799-1868) and Juan Illingworth Hunt (1786-1853). The best thing about the fort museum is that it is outside.

After spending sometime at the top of Santa Ana hill and walking back down the 444 stairs to the bottom, I visited (at the foot of the hill) Barrio Las Penas - Guayaquils oldest neighborhood. Las Penas is very historic with houses dating back over a century, many famous people have lived there including writers, musicians and several presidents. Around Las Penas is the port, Plaza Pilsener with its 'Dalek' fountain and a few art shops. From here I walked back along the Malecon towards the city center. Along the way I saw the kids park beside the water, a bronze work of Captain Arturo Prat Chacon (1848-1879), parks with pond areas, gardens and plazas, games and exercise areas, fountains, bronze artworks and the impressive monument of Simon Bolivar and San Martin shaking hands. I enjoyed the day very much. I will return to Guayaquil in the future and get to know the city better, there are many more sights including museums, beaches and parks. I look forward to it. The website InGuayaquil has more information about the city. From Guayaquil I headed to Manta on the coast, 3hrs 30mins by bus.


View all photos in the Guayaquil Photoset 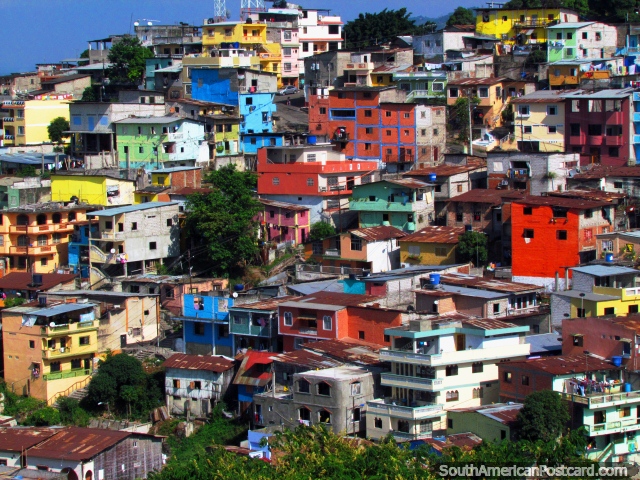