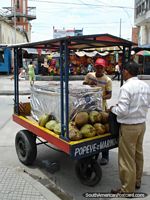 Cut a hole in the coconut and use a straw to have a drink, Barranquilla.

Watches and belts for sale in the street of Barranquilla.

2015 / 2016: I did this trip after returning to Barranquilla from Georgetown (Guyana) and again on the way back from Cartagena. Fairly unexciting to be honest but you get glimpses of the coast and can see many birds on a nice sunny day, sit on the left. I suggest closing your eyes as you pass through the filthy disgusting fishing village called Cienaga, people living in a rubbish tip basically. Open your eyes again after that!

2010: When I was in Barranqilla the second time I had come here from Taganga near Santa Marta and stayed a night and had a bit more of a look around, mainly in the markets. There was all kinds of things for sale, flowers, belts, medical potions, juice and fruit, watches, soccer jerseys, jandels and shoes and a shop that sold fans. The weather is hot in Barranquilla. I stayed in a cheapish hotel somewhere in town and ate some bad Chinese food across the road from the hotel and had a good rest and sleep. When I left Barranquilla this time I took a co-op taxi-van from Barranquilla to Cartagena. It was supposed to take an hour and a half but because I was the first to be picked up from my hotel and we had to drive around the city picking up the rest of the passengers and some we had to wait a long time for, it took 3 and a half hours in the end in total. This didn't particularly make my day, well actually the day was pretty much gone by the time we got to Cartagena. Leaving Barranquilla at last and passing the Jardines del Recuerdo (gardens) while we headed west towards Cartagena along the coast. The scenery was very green and hilly on the leftside while on the right I could see beaches, resorts and the sea. The road is in good condition and although the taxi-van had a sign saying that it did not exceed 80km per hour, they always travel at more like 100-120km per hour, which was the case. I enjoy taking lots of photos during my journeys from place to place of the countryside and anything else that catches my eye along the way. But the taxi driver didn't make this so easy. Everytime I wound the window down to get a clear shot, he would tell me to put it up so not to affect the air-con. I told him that since I had sat in the van for 2 hours driving around Barranquilla picking up people that I would take pictures if I wanted to.

2008: When I arrived in Barranquilla late at night it had been a very long day of 4 airplanes with 3 different airlines to get here, La Paz to Cusco to Lima to Bogota to Barranqilla. A taxi from the airport took me to a hotel somewhere in the center. A man in the lobby who was also a guest insisted many times to me that he 'was the doctor' while I sat there having a bite to eat and a beer. I didn't understand what this meant at the time, I needed to sleep. The next morning I took a trip in a taxi out into the street chaos to change some money and get a few things, it was hectic out there with fruit stalls and street vendors and traffic. Then I headed back to my hotel to wait for a minivan to pick me up to go east to Santa Marta. The drive to Santa Marta took only 90 minutes at an average speed of 120kmh along the coast.


View all photos in the Barranquilla to Santa Marta Photoset


My Hostel & Hotel Reviews for Barranquilla to Santa Marta, Colombia: