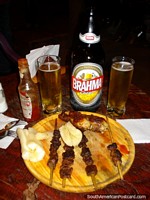 Steak kebabs on sticks with chicha and beer in Ybycui. 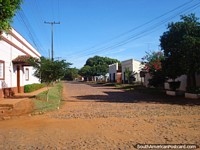 The cobblestone streets of Ybycui. 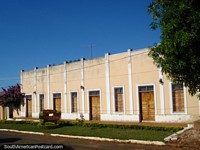 An historical building in Ybycui. 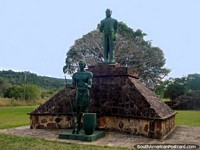 The bus rolled into the small town of Ybycui shortly after midday and I went to find a place to stay. I found a little hospedaje not far from the bus stop. A hospedaje is basically a place where a family live and they have rooms for people to stay in and you share meals with them if you like. The family were very nice and had 3 children, the kids made the room up for me. They were just sitting down for Sunday roast lunch, they asked if I was hungry and I sat down at my own table and joined the feast. There may have been a beer go down also.

I decided to spend the afternoon wandering around the town and visit the national park the next day. I walked around Ybycui, locals would ask why I was there, they don't see many travelers around there. I was rare. Being a Sunday it was very quiet along the main street, just people zipping around on motorbikes up and down the road. It is a pretty laid-back place, which probably sums up Paraguay as well. There's nothing terribly exciting to see in the town but its pleasant, tidy and clean. The people have nice houses and gardens and the roads are cobblestone and there are lots of trees. There are some nice colonial buildings like the college and the local church. The main street has a nice area that runs down the middle with seats, trees and people hanging out.

In the evening, a few doors down from the hospedaje, a woman barbarqued the finest meat outside on the footpath, plenty of meat on a stick, chicken pieces and a vegetable called chicha. It is perfect with salsa and a cold beer. The beef is so tasty here, that's another great thing about Paraguay. The next day was the day I had set to see Ybycui National Park.

Getting to Ybycui National Park

I was hoping to see the colorful butterflies that Ybycui is known for and also a waterfall or 2. The park is not close to town and buses there are not frequent. I paid a guy to take me, about $20USD for the 30 minute journey down a long road past farms to the park entrance. I paid the small fee to enter and I took a photo of the map that is on the wall in the office, they have no maps to hand out.

I walked down the grass road and path to some statues. There is an important looking man on top of a concrete pedestal and in front at ground level is a native man holding a cutting tool. Nearby there is an old building made of brick and stone with archways and doorways and ramps, it looks like it was used to pump water from the river. There is a huge wooden wheel inside that would have been used to gather it. Up the spiral staircase there are some nice views of the area, a statue of a man with a sword stands in a grass area.

I found the entrance to the bush walk over a concrete dam structure, the temperature and sun was very hot. I hiked through the bush around the path, beside the river, over rocks and obstacles for about 1500 meters until I reached the waterfall. It is not exactly Iguazu but it's a nice little waterfall coming over a big sheet of rock and into a little rocky and tranquil pond and river area where lots of colorful butterflies and other insects like hornets hover around.

There are quite a few different colored butterflies, yellow, orange, red and the big metallic blue ones. They aren't always easy to photograph especially the big metallic blue butterflies that pop out from nowhere and quickly fly past you, then disappear. There is a camping area just up from the waterfall where there was a tent pitched and another path that I took to get back. Along the way there were butterflies and a spider with its web and pray. There is another waterfall at Ybycui but I was happy with seeing just the one. Ybycui National Park is cool, there wasn't as many butterflies there as I was expecting but it was good to have a look and have a trek through the bush. This is certainly off the beaten track!

Hitched Back to Town

Transport back to town from the park entrance was not abundant so I began to walk. There wasn't many vehicles around but I stuck my thumb out and eventually I got a ride from a local.

In the afternoon I got a bus from Ybycui to Asuncion, it took about 3hrs.


View all photos in the Ybycui & Ybycui National Park Photoset

Hospedaje La Esperanza, Ybycui, Paraguay (May 2009 - 1 night) - More great Paraguayan hospitality here with a nice family, the lady makes nice food that you can partake in. Her husband took us for a drive around Ybycui and to his friends house who spoke english so the we could have a chat. Recommended.
Paraguay Travel Blog | Photos of Paraguay | Festivals in Paraguay | South America Videos 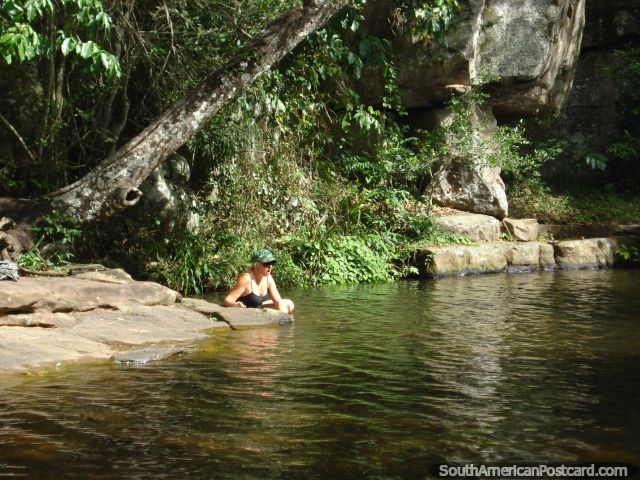