The Salta Police Headquarters, formerly a penitentiary (1872), built like a castle. 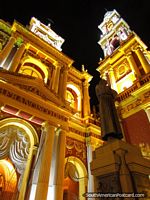 Salta is a special place for me because I have been here many times on my 7 trips to South America, sometimes by default. But I always have fun here. It is the main city in the north of Argentina and is an easy place to get to from the south and east and also the prime place to head north to Bolivia or west to Chile from.

I have arrived in Salta from San Miguel de Tucuman, Corrientes, Buenos Aires, Cordoba and Puerto Iguazu. The city has a nice feel about it and is a great place to enjoy a few days or even a week. There is great shopping and food, nice plaza, great nightlife, clubs and bars. The weather in Salta is quite warm and it's a good place to get used to being above sea level before going higher into the Andes. The altitude is only 1200 meters.

On my first trip to Salta I stayed at a great hostel just near the main street of San Martin. I met some other travelers there and one day we climbed up the 1070 steps to the top of Cerro San Bernardo hill and saw amazing views over Salta and the mountains and Lerma Valley. The 1070 steps begin behind the Guemes man on a horse monument, you can also get up and down on the cable car. Once you reach the top you will be at 1454 meters, the views are amazing in a panorama in all directions and it's quiet compared to the city below. At the top there is a nice area of waterfalls, streams, bridges, staircases and walkways with lots of trees and plants which is really pretty. There is also a couple of monuments Monumento to San Bernardo and Cristo Redentor as well as 3 lookout platforms and the cable car station. We took the cable car down which takes 10 minutes, you get spectacular views of the city and surrounding area. On the right-hand side soon after the cable car leaves you will see the Cristo Redentor monument. The cable car brings you down to the station at Parque San Martin. The Cerro San Bernardo experience is fantastic and fun, so much fun that on my 4th trip here in 2010 I climbed these steps again as well as walked all the way down again instead of catching the cable car!

There is a lot going on in the park, food for sale like fruit, superpanchos, hamburgers, empanadas, popcorn and ice cream. There is a pond where the locals hire little paddle boats for the family to cruise around in.

Walking around the city I saw amazing shops and walking areas full of people and activity and lots of yummy food to eat everywhere. Also the cathedral and churches are nice. The pink cathedral is called Catedral Basilica next to the plaza. There is also Iglesia San Francisco and when it is lit up at night it looks fantastic, as well as Iglesia La Merced and Iglesia La Vina. The Plaza 9 de Julio area has statues, monuments and fountain, it's great to just wander around and enjoy it. Other sights around the city include the Museum of High Altitude Archaeology (M.A.A.M.) and Convento San Bernardo. There are some other good things to see in Salta just out of the central city like the huge Batalla de Salta monument and parks surrounding it near the military base. A 20min bus ride from the city is Quebrada de San Lorenzo for bush and nature walks.

Train into the Clouds

It is also possible to take a train into the clouds, known as Tren a las Nubes, it climbs to an altitude of 4200 meters above sea. It runs 434kms, the round trip takes nearly 15hrs and takes you through many tunnels and over many bridges as well as spirals and zig-zags.

One of the great things about Salta is the nightlife on Calle Balcarce, there are lots of bars and clubs, restaurants, live music, shows and places to dance. On a Friday and Saturday night this area is really pumping and is open until dawn, a great place to meet people!

Salta has some tasty restaurants and superpancho stands but my favourite restaurant is called Chino's, it's an all you can eat 3 course buffet. It has it all, hot food, salads and deserts, all for 25 pesos, it used to be 15 pesos. I'm sure the price is more now! I have been there many times, you can't lose! If you love to eat superpanchos (long hotdogs with ketchup, mustard and mayonnaise), there are several stands on Calle San Martin open all night like Hugo's Panchos, indulge!

Salta has many hostels and hotels in various parts of the city. I would recommend staying near the center of the city like around Calle San Martin or in some of the streets off of it. There are lots of internet cafes, laundrys, banks and ATM machines in the center.

Which Direction to Take

I have left Salta in 4 different directions, to La Quiaca and Salvador Mazza to cross into Bolivia, to Paso de Jama 3 times to enter into Chile and to Buenos Aires which costs over $100USD in a direct bus.


View all photos in the Salta Photoset

Hostal La Linda, Salta, Argentina (October 2015 - 1 night) - Located in Buenos Aires Street off San Martin Street. I payed $300 pesos ($31USD) for a room the size of a shoebox with a private bathroom with hot water. The bed was a thin single one. The wifi was up and down, not great in the room but worked better in the dining room. Breakfast was included but was only toast and coffee which is not a breakfast in my opinion, throw in an egg or 2 and that's more like a breakfast as far as I am concerned. Kind of expensive for what you get, there are many more options in Salta to choose from.

Hostal El Andaluz, Salta, Argentina (October 2015 - 1 night) - Hostal El Andaluz is located on Cordoba Street near the San Martin Street end. I payed $240 ($25USD) pesos for a private room without bathroom. Dorms cost $80 pesos ($9USD). There is a kitchen and outside patio area plus free wifi. An easy-going place that has several bathrooms and showers beside the patio. A simple breakfast is included, bread with butter and jam, tea, coffee and juice. Not fancy but not bad for the budget traveler.

Apart Hotel, Salta, Argentina (April 2014 - 1 night) - I arrived in the evening and asked what the price of a room would be, the man said $150 pesos. I asked for something cheaper so he dropped it to $100 pesos. That was much better! My own room with tv and bathroom. Just what I need for a good nights sleep in Salta, a city I know very well.

Terra Oculta Hostel, Salta, Argentina (Mar 2008 - 10 nights) - An enjoyable stay here. A great rooftop bar and terrace where you can enjoy the sun, read, dry cloths and hang out, a free to use kitchen, table tennis, it's in a great part of town near the park, it's off St Martin. A good place to meet people and have fun. There was only 1 computer when I was there which was shared with the staff so that is the only hassle but there are internet cafes around the area.

Hostal De Las Nubes, Salta, Argentina (May 2009 - 3 nights) - I had my own small room with bathroom for 50 pesos per night which is really good considering a dorm in a hostel will cost between 35 and 40 pesos. Friendly owners and complimentary basic breakfast.

Hostal Prisamata, Salta, Argentina (Aug 2008 - 3 nights) - This hostel is located not too far from Balcarce where all the nightlife happens in Salta. It's a very chilled out and laid-back place, there are hammocks, a kitchen to cook in and make tea and an outside area and courtyard. The price is good, they have internet, the rooms aren't too bad and the showers work.
Argentina Travel Blog | Photos of Argentina | Festivals in Argentina | South America Videos 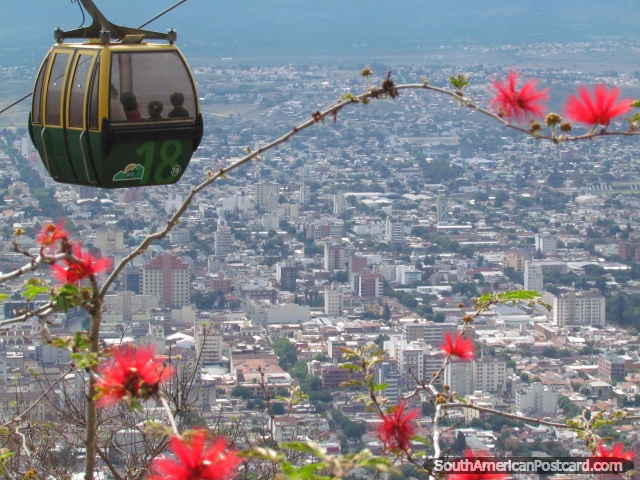