Blue elf on a rock at Jujuy park.

Protest march in the name of Tupac Amaru in Jujuy. 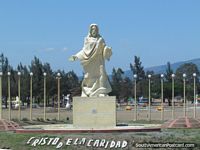 Jujuy is 2hrs 15mins north of Salta and 4hrs 30mins south of the Bolivian border. I visited Jujuy as a stop-off point between these 2 places and to have a look around the city. Jujuy has a similar feel to Salta but is a little shabby around the edges. However, I did see many absolutely gorgeous women here, 100's.

Walk from The Bus Terminal

The bus terminal is in the center of the city beside the market and within walking distance from the central plaza and shops. There are a few cheap places to stay in the streets around this area. Across the river which in late November was bone-dry apart from a wee trickle of water, is the main city center.

Firstly I came to a small plaza called Plazaleta Miguel Angel Pereira, it's nothing special but I researched who he is / was and found out that he is (still living, born in 1957) a well known producer, film director and screenplay writer of Argentinian cinema. Born in San Salvador de Jujuy, here is a list of his movies at the Internet Movie Database. Quite a few of his films are short documentaries about Jujuy. Moving on, a short walk away I came to church Iglesia de San Francisco originally built by 2 monks from Santiago del Estero in 1599. It was made of adobe walls and straw roofs until replaced in 1689 by a more solid church of adobe and a carved wooden roof covered with mud tiles. In 1900 a 4 bodied tower crowned by Cristo Redentor's image was built. In 1925 the new church was built in Classical Corinthian style with 7 marble altars and an octagonal dome. It has an harmonium from 1875 and an organ from Bergamo Italy, in 1927. A statue of San Francesco di Assisi (Saint Francis of Assisi) stands in the courtyard, he was an Italian Catholic friar and preacher. The church is located on the corner of Belgrano and Lavalle streets. I walked for 15-20mins in the direction of the park, Parque San Martin. It's not really that attractive to be honest, there's a fountain, palm trees and a monument to independence leader Jose de San Martin (1778-1850) upon his horse - constructed in 1950, 100yrs after his death. I walked to a street nearby for a view over the valley and railway track running below. I passed a run-down pink tango bar called New Zeppelin Bar. I sat down for a cool ice-cream in a little park with a greek-looking statue called El Trabajo (work). I found an outside theatre and a park called Tupac Amaru, it was full of elf statues and was a kids park really.

Plaza Belgrano and the Cathedral

Now into the heart of Jujuy to Plaza Belgrano and the cathedral Iglesia Catedral Basilica built in baroque style in 1763, it's a national historic monument (declared in 1931). This church was originally built in 1593 and was ordered to be constructed before any other building in Jujuy. From 1606 to 1612 a new building was built but it fell down in 1631. Another was built in 1659 but it was not the last. In 1691 they decided to build again, which finally got underway from 1761 to 1765. Spanish sculptor Martinez Montanes (1568-1649) was brought in from Spain and pictures came from Cusco and Potosi. In 1843 the cathedral was destroyed by an earthquake and again re-built in 1907. Plaza Belgrano was over-flowing with activity, food stalls cooking bbq food, sausages, hotdogs and kebabs. It's a beautiful plaza and park with a lot of space to sit and relax while eating hot food or a cool ice-block. The monument is of Belgrano on his horse holding a flag high up in the air. A government building built in the style of a French palace Casa de Gobierno stands on the south side of the plaza and was heavily guarded on this day because a protest was brewing. At the back of the government building there is Plaza Espana and a few monuments - a statue of a woman called La Paz, another of 2 figures sitting on rocks with one reading from a book and one to Jose Hernandez (1834-1886), an Argentinian writer. His most famous work is a poem called Martin Fierro.

100's of people had gathered for a huge protest and march through the city. It was all something in the name of Tupac Amaru (1545-1572), the last indigenous monarch of Inca Peru. Huge banners were strung up to the fences around the Casa de Gobierno and fireworks were let off as a big group of motorbikes kicked off the protest. 1000's of people waving big flags then marched down the street to the plaza area where things got very noisy.

The best thing to do from Jujuy is to head north and explore the Quebrada de Humahuaca for a few days. From Plaza Belgrano I headed back to the hotel and then the bus terminal for a bus to Salta, a city I know well. Just out of Jujuy on the way to Salta is a town called Palpala. The place is full of interesting parks and monuments including a huge Jesus statue. I took a few photos from the bus but will make sure I stop here next time I pass through.


View all photos in the Jujuy Photoset

Residencial Rio de Janeiro, Jujuy, Argentina (November 2011 - 1 night) - Located a few blocks from the bus terminal. I had a small but comfortable room, I shared a bathroom. It was a reasonable price and the staff were friendly.
Argentina Travel Blog | Photos of Argentina | Festivals in Argentina | South America Videos 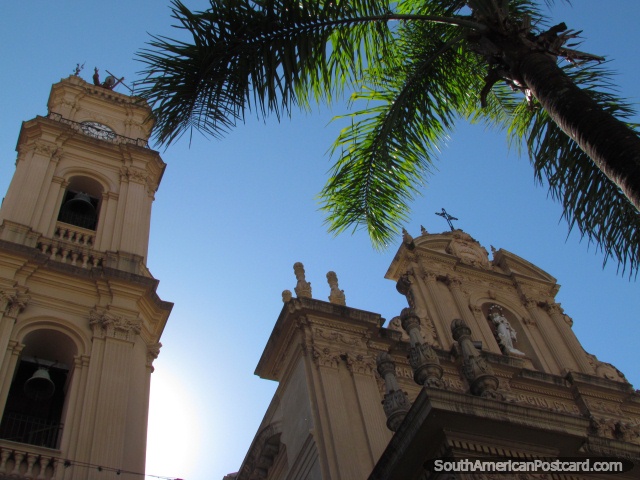