An interesting and abstract wall mural based around music in Cafayate.

Enjoying the views at the Quebrada de las Conchas in Cafayate. 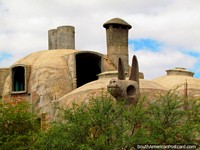 The top portion of an interesting building in Cafayate with a llama's head. 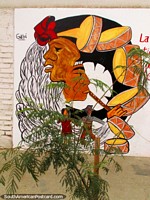 Cafayate is one of the special places to visit in northern Argentina, a place to get to know it's streets and to explore the amazing ravine / gorge - Quebrada de las Conchas. Cafayate has existed since around 1840 and was mainly developed in the decades after around the wine industry.

The town itself is absolutely lovely indeed (I don't use the word lovely very often at all). There are many arts and crafts shops, colorful wall murals in the streets around the main plaza, a wine museum (Museo de la Vid y el Vino) and the cathedral (Nuestra Senora del Rosario) beside the main plaza. Around the outer streets of the town are vineyards. The tourist information office is located at the main plaza. The plaza itself is quite beautiful and large and has many trees with yellow leaves and a couple of monuments. One of the monuments is of a wooden man depicting a worker carrying grapes, the other is of General Jose de San Martin.

Cafayate is one of those towns where the locals ride around on bicycles a lot, unlike other towns I have been to with motorbikes constantly buzzing around the place. That's good! The streets are quite charming with flowers in flowerpots and lamps above the sidewalk in places. Colonial arquitecture is scattered around town (arched windows with wooden shutters etc). On one of the back streets I came across a man selling llama meat in the form of hams and salamis, he also had some cheeses. I came across an awesome 3D wall mural that had peoples faces cast into it and created to depict the carnival. I walked past one of Cafayate's first buildings - the hospital (1875), an historical building of pink. Exploring the other end of town I visited a plaza with monument of one of Argentina's war heroes Gral. Martin Miguel de Guemes, there's a fountain and cactus plants here also.

So now it was the afternoon of the tour to the gorge. I booked a tour with Ipuna Tours. We headed out into the rocky wilderness by road stopping at various places along the way. We firstly explored on foot various rock formations then we continued on to see the Castles (Los Castillos) which are 3 tall rock forms side by side. Next we went to see the Obelisco, a huge rock 26 meters high. The next location we went to required a lot of walking, a place with very rough terrain where we climbed hills, saw amazing red rock ridges and enjoyed the fantastic views. The natural amphitheater (El Anfiteatro) was the next stopping point, the echo and acoustics were just fantastic. Bring a guitar, bongo drum or flute to this place! We had a quick look at a waterfall called Garganta del Diablo but there was no water, they said you need to see it in January or February. The last thing we did was check out the views from the lookout - Mirador Tres Cruces, unfortunately we just missed the sunset. And that was the tour. Let me be honest, the tour was great, lots of fun exploring and walking in a group situation. Make sure you take some food and plenty of water. However, I really believe the photos I took out of the front seat on the top deck of the bus when I came to Cafayate from Salta capture the Quebrada de las Conchas terrain so much better! Take a look.


View all photos in the Cafayate Photoset

Cafayate Backpackers Hostel, Cafayate, Argentina (April 2014 - 2 nights) - I would love to give this hostel a great review but it is slightly difficult when there is a big problem with this place. That being, that there is no member of staff here at night to control what is going on. People partied all night outside our dorm keeping everybody awake until around 4am. It makes the tour the next day a little harder when you have not slept well. Actually the owner is not around much in the day either, makes booking a tour with her more difficult - I just walked into town and booked one there. If you are using the kitchen, be prepared to have to move each time somebody walks through, it is very thin. She's a nice lady, but I'm sorry you can't have drunk guests keeping the whole place awake all night with guitars and loud talking.
Argentina Travel Blog | Photos of Argentina | Festivals in Argentina | South America Videos 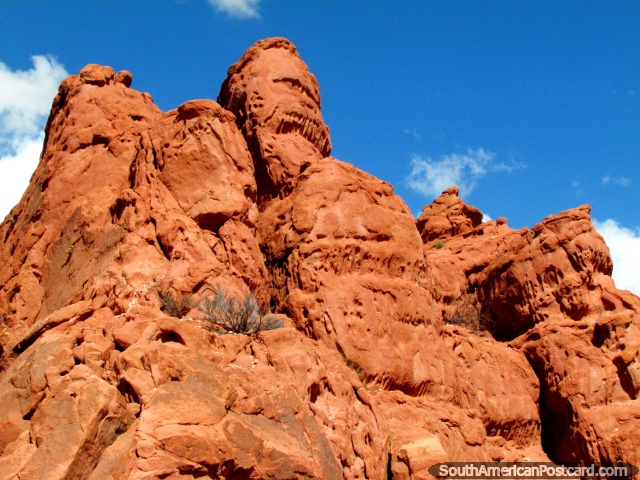